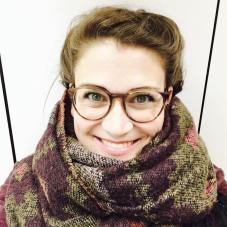 Hello there, whoever is reading this!!
My name is Laura and i am 28 years old, usually very happy, also usually quite healthy – both mentally and physically. I am surrounded by a bunch of really close friends, live in my first very own tiny apartment and have a very good relationship to my parents on one hand and my body on the other hand, but that hasn’t always been the case, for either of the before mentioned…

As a kid, i didn’t fit in, i wasn’t this happy, carefree little person, that enjoys the world without sorrow. Quite the opposite really. When i was about 12 all the girls around me
started to develop some more feminine body parts, while my body was still the body of a young girl and would remain like that for another 2-3 years. Those were quite dark years in my memory because i so desperately wanted to become a woman, but that just didn’t happen for some more time. I guess it didn’t help either, that i was too clever for my own good.

School was easy for me, which made me even less appreciated by other kids. And i know this must sound like very much „first world problems“, but those were MY first world problems, and i only knew this world, so they were very real for me. For a long time i hated going to school because i was bullied both for dreaming in class, because the topic was boring to me, and for wearing kids clothes, because the ones in the women’s section didn’t even nearly fit me. Being told to eat more, because one would be able to play the piano on my ribs, is something i still remember – even 14 years later.
It was only due to the fact, that i have an incredibly strong mom, that i came out of this period relatively undamaged. She was at one point so angry with me for hating on my body, that she forbid me to speak mean things about it. She was in tears telling me how much she had wished for a child and how careful she was during her pregnancy with me in order to make sure i was going to be ok. She reminded me, that i would never speak so badly to a friend and that she would not allow me to become my own enemy. At first, i was very shocked, i figured she wasn’t entitled to tell me how to speak to and about myself. But seeing her being hurt by my actions towards myself did help me realize, that i was the biggest bully of them all. And after that talk, we went to buy skinny jeans, tiny ones, but from the women’s section, which to me served as proof, that this body indeed can be the body of a woman.

It is also thanks to my mom, that i now have a functioning relationship with my dad. After my parents divorced, he fell into a deep depression. I was 18 at that time and could not understand, how the strongest, smartest person, who always knew what to do – my rock, crumbled so easily. Also i didn’t think he would be hurt, because he was never home, a real workaholic, who was married more to his job, than his wife. A wonderful father, but apparently not so wonderful husband… But after my mom left him, he sunk to such a deep place, that i refused to visit him alone, because i was sure, i would find his body somewhere. I went to study in another city, so i had a good excuse to move out. And when he called me on my 20th birthday, saying that he is so happy, that he got to experience this event, i was so mad, that i wouldn’t speak to him for a while. And it took another long talk with my mom, to be able to understand, that he was allowed to be hurt. But also, that i was allowed to be worried, because after all i was still the child and he was the grown up, and i needed to respect this order again, in order to remind him, that i needed him. And that she would encourage me, to tell him, why i refused being around him. Not out of hate or dislike, but out of fear, which is a very selfish, but also very real feeling… And i’m still sometimes worried about him, but he promised, that he wouldn’t hurt himself and i learned to trust him again. I still hate the fact, that he refused to get professional – or other – help at all and that my sister and me were (and often are) his only conversation partners. But i love the fact, that i got to know my dad as a flawed person instead of merely in the role of a father. So if i had to draw any conclusion of my stories, it would be, that all problems are valid problems and a lot changes with time passing. Healing is a long and unpleasant journey, but there is almost nothing, that cannot be talked about.

Looking back i realise, how much the mental health of others – mainly my dads – affected me, and how much mine-affected others. In both cases, for me letting people know how i felt, was scary but ultimately my solution.
In Switzerland, mental health is a topic of growing public interest, but for the generation of my father, it is almost unthinkable for a man to get treatment – not for society in general, but for men growing in this role of the head of a family, infallible and strong. It is however becoming more accessible and accepted. Many young people have a healthier approach to it and encourage each other to seek help, if needed.